It was record setting year for the Valparaiso Crusaders.  There were many exciting moments as the Crusaders set a school record for victories in a year and made the NCAA tournament for the first time in a long time.  Before we get to the top ten lets get to my honorable mention.

Honorable Mention
* Wright State knocks Detroit out of the Horizon League tournament at the buzzer. I think the best part of this video was all the people in gold shirts jumping in celebration.  For about 10 minutes that night, Crusader fans were Wright State fans!

Top Ten Moments in Valpo's 2012-2013 Season
10 - Valpo plays in ESPN's 24 hours of basketball
The 7am start was early for the players, but they woke up by the second half to put away a bad NIU team. I thought this was a great way to start the season on national television.

9 - Keith Carter Transfers to Valparaiso
Carter was a good get by Coach Drew, adding the talented guard to an already strong incoming class (see #8).  Carter will most likely crack the starting lineup in mid/late December when he becomes eligible.

8 - The Incoming Recruiting Class
The incoming freshmen will hopefully help ease the pain of losing the 6 graduating seniors.  This incoming class is loaded with offensive talent.  Nick Davidson, Lexus Williams, Clay Yeo, Alec Peters, and Jubril Adekoya can all fill up the stat sheets.  Several of these guys will see significant playing time immediately with a few probably cracking the starting lineup.

7 - Senior Night Clinching Horizon League Regular Season Crown
Senior night put our Crusaders up against a short handed Youngstown State team.  YSU kept it close for most of the game, but Valpo's experience proved too much down the stretch.  It was an exciting night and a great way for this group to end their regular season home career. 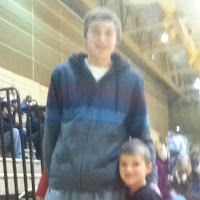 Of course I'm talking about the photo of my son and Ryan Broekhoff.  E is an aspiring baseball player and, well, we all know what Ryan's deal is.  The photo came out a little blury (ok a lot blury) but it was a moment my son won't soon forget.

5 - Harlem Shake Valpo Style
Yes we lost the game in heart breaking fashion to Detroit.  But, not all was lost.  The Valparaiso student section pulled off one of the best Harlem Shakes.  Lets look at a few of the stars of the video.  First, garbage can guy is fantastic. His grace moving around the others while keeping the beat with the can is quite impressive.  Next is a team effort between the penguin who slides across the court and the guy who comes up next to him calling him safe.  Then there is the cheerleader in the corner, the one who does the splits.  Shortly after the splits she is doing something with her finger.  I'm not sure what you call that dance move, but I'm sure her mother is quite proud. Next, the kids who wipe the court dry did a great job staying out of the way.  Lastly, we have the fella in the American flag hoodie getting way to far out on the court allowing the ref an opportunity to get in the video.

4 - 22 Point Comeback at Detroit
First off, who doesn't like beating Detroit?  Coming back from such a huge deficit in the second half to our rivals made it even sweeter (granted we would return the favor on our home court later in the season).  My favorite part of this game was Erik Buggs completely shutting down HLPOY Ray McCallum. 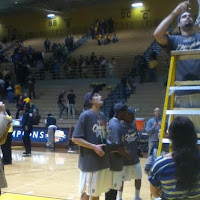 After watching a big lead disappear, Valpo fans were getting a little nervous that the team would once again come up short in their bid for an NCAA appearance. But once again, Buggs would put this team on his back and Ryan Broekhoff would bury a huge three pointer and Valpo would prevail.

2 - Traveling to Auburn Hills for NCAA
I was lucky enough to travel to Auburn Hills for the big game.  Playing with an injured KVW, Valpo really didn't have much of a chance against a much bigger/stronger/talented Michigan State team.  Still it was excited to get to cheer for this very likable team one more time.


1 - Broekhoff Beats the Buzzer
Selecting the number one spot was tough.  Thinking back to this game and the emotional roller coaster the fans/players were on I had to put this in the top spot.  With my son in my arms balling his eyes out because "the refs are cheating, Brown is holding our guys everytime" I tried time and time again to reassure him that Valpo would find a way.  Thank goodness for a sequence of three events: Matt Kenney hitting a three from the corner over the 7' Brown, Brown missing a free throw, and Broekhoff hitting that fall away three pointer (Bryce Drew falling backwards nearly warranted it owns place in the top ten). Here are three different looks at the moment that will be remembered forever from this season. Behind the student section "Holy Moly", the ESPN call, and the call from Crusader Radio guy Todd Ickow "McPherson gets giddily".

Wednesday night one team came to play the other did not, and YSU kept themselves in the hunt for one of the leagues coveted double byes. YSU played very well on both ends of the court all night. Kendrick Perry is an offensive stud, and teams better take notice of Kameron Belin.

The only player I saw who had a decent effort was Lavontae Dority, who did most of his damage when the game was already decided.  Everyone else, including Ryan Broekhoff and the normally energetic bench seemed to be just going through the motions tonight.  Valpo's awful shooting early on and their refusal/inability to get the ball inside to KVW early and often really hurt this team.

Luckily it is a quick turnaround with Milwaukee coming in to Valpo Friday night. The Crusaders need to get their heads right, Matt Kenney healthy, and find their outside shooting.  I'm growing a little concerned about Rowdy's shooting slump over the last two games and wander whether he is battling a minor injury or illness or if he's just off.

Let's hope for a better showing Friday night as Valpo will try to get back to their winning ways against Horizon League cellar dweller Milwaukee.
Posted by Hank Curry at 8:29 PM 2 comments:

Valpo finally gets back on the court Wednesday night in Youngstown where they will face off against the Penguins.  Valpo has won 6 in a row while YSU has been victorious in each of their last 3 games.  With a win, Valpo will start to separate themselves from the rest of the Horizon League while a loss will create a bigger mess at the top of the standings.

YSU does several things pretty well.  They are in the top 100 nationally in rebounding, points per game, and assists. They have several guys who live by the 3 point shot: Belin, Allen, and Perry.  Valpo will need to put a hand in their face and make them hit a tough shot if they are going to shot from out there.  While their 3 point shooting can be a strength, I watched them play the other day and after hitting a few 3's early on they started shooting them nearly every time down the court early in the shot clock.

The Penguins have several All Conference caliber players in Kendrick Perry and Damian Eargle.  Perry is a scorer and will be hounded all night by Erik Buggs.  The last spotlight match up featuring Erik Buggs he shut down Detroit's Ray McCallum, Jr.  I like Erik's chances to repeat that defensive success Wednesday night.  Eargle is their big guy.  He is an excellent shot blocker, decent rebounder, and can score a little bit as well.  He has had trouble in the past guarding the much more physical KVW.  I really think Valpo will attack Eargle, more so with passes to the post than with drives to the hoop.

I'd look for KVW to get involved early and often which should open the outside for the Valpo shooters.  While winning on the road during conference play is never a sure thing, I think the Crusaders will go in play their trademark solid defense and come away with a rather easy win.  I'll predict a big night for KVW (at least 20 points) and the typical 18/10 night from Ryan Broekhoff.
Valpo victory: 76-68
Posted by Hank Curry at 4:55 PM 2 comments:

For Valpo's next opponent, the Crusaders will welcome in the Phoenix of Green Bay Wednesday night to the ARC.  Valpo has been on a roll recently with victories in their last 5 games and sit at 5-1 a top the Horizon League standings. Meanwhile, Green Bay is right in the mix sitting at 4-2.  They are unbeaten at home and have not found a W while on the road in conference play.

Green Bay features some tall bodies in Alec Brown, Brennan Cougill, and Jordan Fouse.  Fouse has been outstanding recently for the Phoenix.  His length on defense at the top of their 1-2-2 zone has cause some real problems.  Brown has been solid averaging 12 a game in conference, but his fg% is down near 40%.  Cougill (whom reminds me of the marshmallow man) has comeback from his off the court issues to average nearly 10 points a game off the bench.

Green Bay also has some outside shooting in the form of Keifer Sykes, Sultan Muhammed, and Cam Cerroni.  Sykes can be an explosive player, a future all HL member in my opinion, and Valpo would be wise to keep track of where he is at on the court.  Green Bay rebounds well, plays good defense (allowing only 58 points per game in conference play), and they have several shot blockers.  Here are their PPS for conference play only.

Here is how I'd attack Green Bay.  First, I'd let Brown and Cougill shoot 3's all day if they want to.  Force those two outside for their shots.  I really think the key to beating GB is to attack the paint and attempt to get their big guys into foul trouble.  I think Valpo can get Brown and Fouse in foul trouble by creating contact with guys like KVW, Ryan, Matt, and even Erik.  Those guys like blocking shots, but fouling is a big risk that comes with the shot blocking.  I really expect to see a lot of Erik breaking down their zone off the dribble and creating a lot of open looks for his perimeter shooting teammates.  Buggs making good decisions when he gets into the lane will be key.  I expect Bogan to continue his hot shooting from the corners and KVW to have another outstanding game.

Valpo has the higher team PPS and higher individual scores.  I suspect Valpo will win this game rather easily.  I'll throw a final score of 68-59 out there.
Posted by Hank Curry at 10:53 AM 2 comments:

Promote Your Page Too

Posts from the Past